Top 10 most beautiful castles in Germany

The video shows the rankings on the 1st of October 2017

Germany is famous for its castles, with their pasts filled with knights, dukes and holy wars. Out of all the countries in Europe, Germany has one of the best collection of amazing castles ! Fairy tale castles that sit atop high mountains, medieval wonders or magnificent structures built to protect towns or just pleasure some kings, Germany has it all. Explore with us Germany's most amazing castles.

Hohenschwangau Castle is a 19th-century palace in southern Germany, very close to the border with Austria. It was the childhood residence of King Ludwig II of Bavaria and was built by his father, King Maximilian II of Bavaria. More than 300,000 visitors from all over the world visit the palace each year.... view details

Sigmaringen Castle was the princely castle and seat of government for the Princes of Hohenzollern-Sigmaringen. Situated in the Swabian Alb region of Baden-Wurttemberg this castle dominates the skyline of the town of Sigmaringen.
The castle was rebuilt following a fire in 1893, and only the towers of the earlier medieval fortress remain. Schloss Sigmaringen was a family estate of the Swabian Hohenzollern family, a cadet branch of the Hohenzollern family, from which the German Emperors and kings of Prussia came. The castle and museums may be visited throughout the year, on guided tours.... view details

Nuremberg Castle is a historical building on a sandstone rock in the north of the historical city of Nuremberg.
The castle comprises three sections: the Imperial castle (Kaiserburg), some buildings of the Burgraves of Nuremberg (Burggrafenburg), and the municipal buildings of the Imperial City at the eastern site (Reichsstadtische Bauten).
The castle, together with the city walls, is considered to be one of Europe's most formidable medieval fortifications.... view details

The Albrechtsburg is a Late Gothic castle that dominates the town centre of Meissen in the German state of Saxony. It stands on a hill above the river Elbe, adjacent to the Meissen Cathedral.
In 1710 King Augustus II the Strong established the Royal-Polish and Electoral-Saxon Porcelain Manufactory at the castle, which was the first European hard-paste porcelain manufacture. Meissen porcelain was produced at the Albrechtsburg until manufacturing moved to its present location in 1863.... view details

Marksburg Castle is one of the principal sites of the Rhine Gorge UNESCO World Heritage Site. The fortress was used for protection rather than as a residence for royal families.
It has a striking example of a keep designed as a butter-churn tower. Of the 40 hill castles between Bingen am Rhein and Koblenz the Marksburg was the only one which was never destroyed.... view details 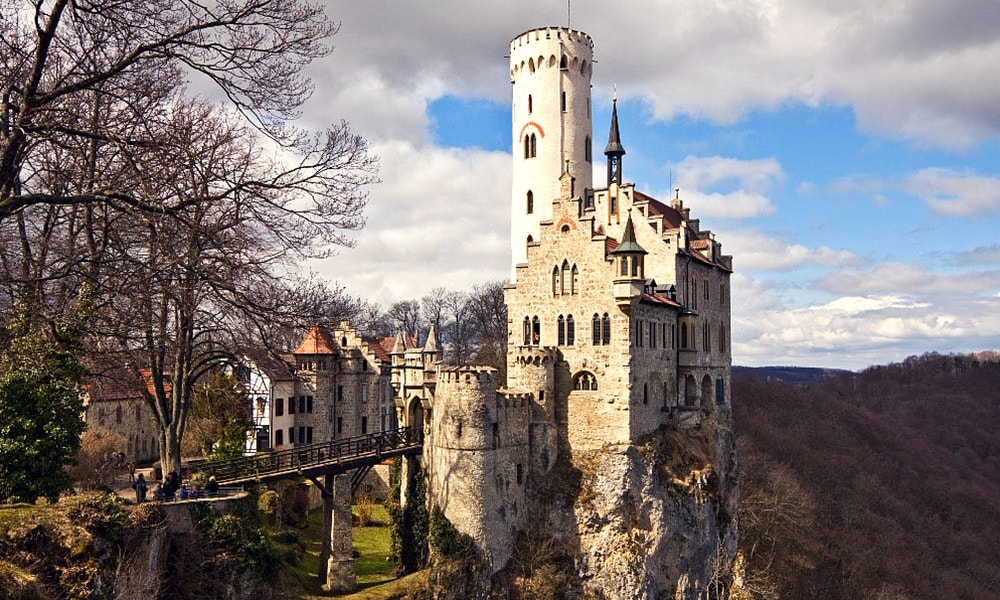 Often hailed as the "fairy-tale castle of Württemberg", Lichtenstein Castle is a romantic castle built by Count Wilhelm of Württemberg to pay homage to medieval times.

The structure we see today was largely inspired by the novel Lichtenstein by Wilhelm Hauff. The castle has an impressive location: perched on an 800 meters-high cliff just on the edge of the Swabian Alps, it offers magnificent views of the surrounding landscape and the valley of the Echaz river, a small tributary of the Neckar river. view details

The Nurburg is a ruined hilltop castle in the German Eifel Mountains near the village of Nurburg south of Adenau. It stands within the famous North Loop (Nordschleife) of the Nurburgring racing course at a height of 678 metres on a volcanic basalt cone. It may be visited for a fee.... view details

Altena Castle was erected by the early Counts of Berg in the early 12th century. Eventually, the House of Berg abandoned Altena and moved their residence to Hamm.
In 1912, Richard Schirrmann established the world's first youth hostel within the castle, which is still in use today.... view details

The Sababurg, also known as the Sleeping Beauty Castle (after the Brothers Grimm fairy tale), is the ruin of a hill castle in the legendary Reinhardswald, a forested upland that runs through the North Hessian county of Kassel.
The site of the Sababurg has been restored by the state of Hesse and opened to the public. From 1959 the ruins were converted into a high class hotel with restaurant and cafe that was opened in 1960. In addition it houses a theatre, the SabaBurgTheater.... view details

Check out them most Instagrammed castles in Germany and find out how to visit them by train at the cheapest prices.