Top 10 most beautiful castles in Spain

A country steeped in history, Spain has its share of charming castles. Even though royalty lived in them for brief periods, more often Spanish castles were designed to withstand sieges. Here is a collection with the most spectacular castles and forts in Spain.

The Castle of Zafra was built in the late 12th or early 13th centuries on a sandstone outcrop in the Sierra de Caldereros; it stands on the site of a former Visigothic and Moorish fortification that fell into Christian hands in 1129.
It had considerable strategic importance as a virtually impregnable defensive work on the border between Christian and Muslim-ruled territory. The castle was never conquered and was successfully defended against the King of Castile in the 13th century. The successful completion of the Reconquista at the end of the 15th century ended its military significance.
Although it fell into ruin in the following centuries, since 1971 it has progressively been restored by its private owners. It can be visited with permission from the owners.... view details

9.Palace of the Kings of Navarre of Olite

The Palace of the Kings of Navarre of Olite or The Royal Palace of Olite was one of the seats of the Court of the Kingdom of Navarre, since the reign of Charles III 'the Noble' until its union with Castile (1512).
In the 15th-century, a German traveller wrote his impressions about the palace in his diary (which is now conserved in the British Museum in London):
"Surely there is no king with a more beautiful castle or palace and with so many gilded rooms (...) it could not say or even could imagine how magnificent and sumptuous is this palace (...)"
The monument was damaged in 1813 by a fire during the Napoleonic French Invasion. It was largely restored in the first half of the 20th century, in works that ...... view details

Coca Castle is one of the best exponents of Gothic-Mudejar Spanish architecture and it is declared a National Monument. It is one of the few fortresses of Spain that does not sit on a hill, but on plain land, surrounded by a broad, deep moat.
The castle is made mainly of brick, used both as raw material and as a decorative element. The limestone appears in the loopholes , the columns of the courtyard and other decorative elements.
In 1958 , parts of the castle rooms became the headquarters of the Forest Training School.... view details

The Castle of San Servando is a medieval castle in Toledo, Spain, near the Tagus River. It was begun as a monastery, occupied first by monks and later by the Knights Templar.
In 1874 the castle was named a national monument. The fortress was depicted in El Greco's painting View of Toledo. It is currently used as a youth hostel.... view details

The New Castle of Manzanares el Real is a palace-fortress erected in the 15th century at the foot of Sierra de Guadarrama mountains.
Its construction began in 1475 on a Romanesque-Mudejar hermitage and today is one of the best preserved castles of the Community of Madrid. It was raised on the river Manzanares, as a residential palace of the House of Mendoza, in the vicinity of an ancient fortress that was abandoned once the new castle was built.
The castle now houses a museum of Spanish castles and hosts a collection of tapestries.... view details

The Alhambra is a palace and fortress complex, one of Spain's major tourist attractions, a UNESCO World Heritage Site and the inspiration for many songs and stories.
It was originally constructed as a small fortress in AD 889 on the remains of Roman fortifications, and then largely ignored until its ruins were renovated and rebuilt in the mid-13th century by the Moorish emir Mohammed ben Al-Ahmar of the Emirate of Granada, who built its current palace and walls. It was converted into a royal palace in 1333 by Yusuf I, Sultan of Granada.
After the conclusion of the Christian Reconquista in 1492, the site became the Royal Court of Ferdinand and Isabella (where Christopher Columbus received royal endorsement for his expedition), and the palaces were partially ...... view details 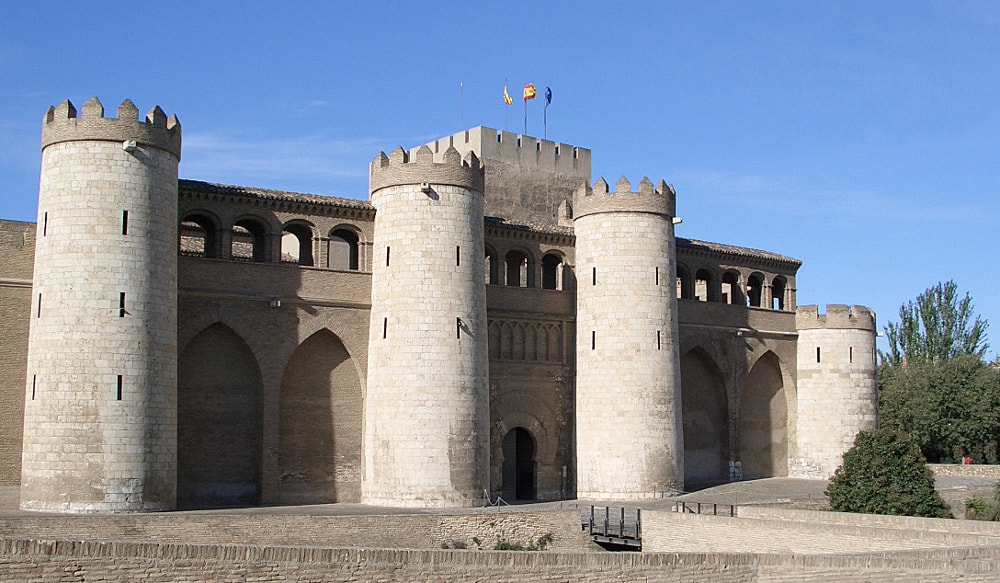 The Aljaferia Palace is a fortified medieval Islamic palace built during the second half of the 11th century in the Taifa of Zaragoza of Al-Andalus, present day Zaragoza, Spain. The palace reflects the splendor attained by the kingdom of the taifa of Zaragoza at the height of its grandeur.
The palace currently contains the Cortes (regional parliament) of the autonomous community of Aragon. The structure holds unique importance in that it is the only conserved testimony of a large building of Spanish Islamic architecture of the era of the Taifas (independent kingdoms).... view details

The Alcazar of Segovia is rising out on a rocky crag above the confluence of two rivers near the Guadarrama mountains. It is one of the most distinctive castle-palaces in Spain by virtue of its shape - like the bow of a ship.
The Alcazar was originally built as a fortress but has served as a royal palace, a state prison, a Royal Artillery College and a military academy since then. It is currently used as a museum and a military archives building.... view details

The Alcazar de los Reyes Cristianos (Spanish for 'Castle of the Christian Monarchs'), is a medieval Alcazar located in the historic centre of Cordoba, next to the Guadalquivir River and near the Grand Mosque.
An alcazar is a type of Moorish castle or palace in Spain and Portugal built during Muslim rule. The fortress served as one of the primary residences of Isabella I of Castile and Ferdinand II of Aragon.
The Alcazar has two towers: the Torre de los Leones ("Tower of the Lions) and the Torre de Homenaje ("Tower of Homage"). The latter has Gothic features including an ogival ceiling.... view details

The Atalaya Castle is located over a spur of the Sierra de la Villa mountains, in the north-western part of the province of Alicante, and it commands the former frontier between Castile and Kingdom of Aragon.
The castle was an important stronghold on the northern frontier of the Islamic emirate of Iberia, and resisted to three different sieges laid by James I of Aragon. He was finally able to conquer it in 1240, although the castle was handed over to the Kingdom of Castile after the Treaty of Almizra of 1244.
The castle is now in good conditions and is the centre of the yearly Moros y Cristianos feast.... view details