The most beautiful castles in Netherlands

The Netherlands has had some pretty impressive castles throughout history. Many were built during the Middle Ages as defensive structures. Over the years, the purpose of these castles changed, and many were turned into comfortable homes where the aesthetics of the design became more important. Today, these castles are a great tourist attraction, where visitors come to admire the architecture, art collections and gardens. Let’s get on with the list of the 10 most impressive castles in the Netherlands.

Radboud Castle was commissioned by Floris V, who reigned as Count of Holland and Zeeland from 1256 until 1296. The building was fortunately completed before the St. Lucia's Flood that affected the Netherlands and Northern Germany on 14 December 1287 (the day after St. Lucia Day), killing approximately 50,000 to 80,000 people in the sixth largest flood in recorded history.
The defensive function of the castle was reduced with the building of walls around the city of Medemblik in 1572 and due to both dismantling and lack of maintenance there was attrition of the castle buildings. Restorations were done both in 1889 and then in 1965, the later with a more historical and architectural correctness.
On 4 September 1939 Nachtwacht by Rembrandt was stored here temporarily before being moved in May 1940 to a bunker in the dunes near Castricum.... view details

Ammersoyen Castle was built by the Van Herlaer family around the year 1350. At the time of its construction, the castle was built along a branch of the River Maas. Just a few years after the construction of the castle was completed, the river was rerouted leaving the castle to be surrounded by a moat.
The castle was designed to be a defensive fortress. When it was originally constructed, it had a central courtyard, surrounded by four heavy towers on the corners. To add to the security, the original design included a moat that ensured any attacker could only invade through the front of the fortress. Except for a brief period in the early 20th century, the castle has always been completely surrounded the moat.... view details

Muiden Castle is located at the mouth of the Vecht river, some 15 kilometers southeast of Amsterdam. It is one of the better known castles in the Netherlands and has been featured in many television shows set in the Middle Ages.
The history of Muiden Castle begins with Count Floris V who built a stone castle at the mouth of the river back in 1280. The Vecht river was the trade route to Utrecht, one of the most important market towns of that age. In 1297 the castle was conquered by Willem van Mechelen, the Archbishop of Utrecht, and by the year 1300 it was razed to the ground.
A hundred years later, the castle was rebuilt on the same spot based on the same plan, by Albert I, Duke ...... view details

Doornenburg Castle is one of the biggest and best-preserved castles in the Netherlands. It consists of the main castle and a front castle which are connected via a small wooden bridge.
The castle was originally a fortified manor built in the 9th century. It wasn't until the 13th century that it was converted into a proper castle. Gradually, through the centuries, the castle was expanded further into its current form.
The castle was occupied until the 19th century. After that it fell into disrepair and by the end of the Second World War it was almost completely destroyed. Fortunately it was completely rebuilt between 1947 and 1968.... view details

Heeswijk Castle is a former moated castle that was originally built in the 11th century and restored in 2005. Heeswijk Castle has played a crucial role in the history of the Netherlands.
In 1672 the French king Louis XIV stayed at Heeswijk Castle during his campaign against the Dutch Republic. At the end of the 18th century General Pichegru, a French general under the command of Napoleon used the castle as his headquarters.
The castle is currently a museum that attempts to reflect the life and traditions of the middle of the 19th century. The armory of the castle is used as a wedding location by the municipality Bernheze.... view details

Hoensbroek Castle is one of the largest castles in the Netherlands. This imposing watercastle is known as 'the most lordly stronghold between Rhine and Meuse'.
Because of its important strategical location in the Duchy of Brabant, located along important trading routes to Maastricht, Aachen and Cologne, the castle was expanded in several phases, becoming the largest stronghold between the Meuse and the Rhine rivers. It contains at least 67 halls, rooms and living quarters.... view details

Doorwerth Castle is a medieval castle situated on the river Rhine near the city of Arnhem.
The original castle, probably wooden, is first mentioned in 1260 when it was besieged and burned to the ground. The castle was then rebuilt in stone. This second castle probably consisted of a simple hall-keep, two stories high with 1.20 meter thick walls, and featured a surrounding moat which was fed by the nearby river Rhine.
During the 14th century the castle was continually enlarged; it reached its largest form just after the middle of the 16th century under Daem Schellart van Obbendorf, the 15th Lord of Dorenweerd.
Directly after WW II a lengthy restoration began that lasted until 1983. By then the castle was back into its 18th-century state and was owned by ...... view details

Nijenrode Castle was built around 1260 by Knight Gerard Splinter van Ruwiel. The location of the Castle was well-chosen: a strategic spot on the narrowest part of the bank of the river Vecht. The river Vecht was part of the trade route from the market-town of Utrecht to the Dutch South Sea.
The Castle was destroyed in 1481 and in 1511. In the 17th century, Bernard van den Bongard III turned the castle into a splendid manor house with a castle-like form and a drawbridge. He also modernized and decorated the outward appearance of the building. The castle was given the typical characteristics of a knightly mansion in the Dutch Renaissance style.... view details 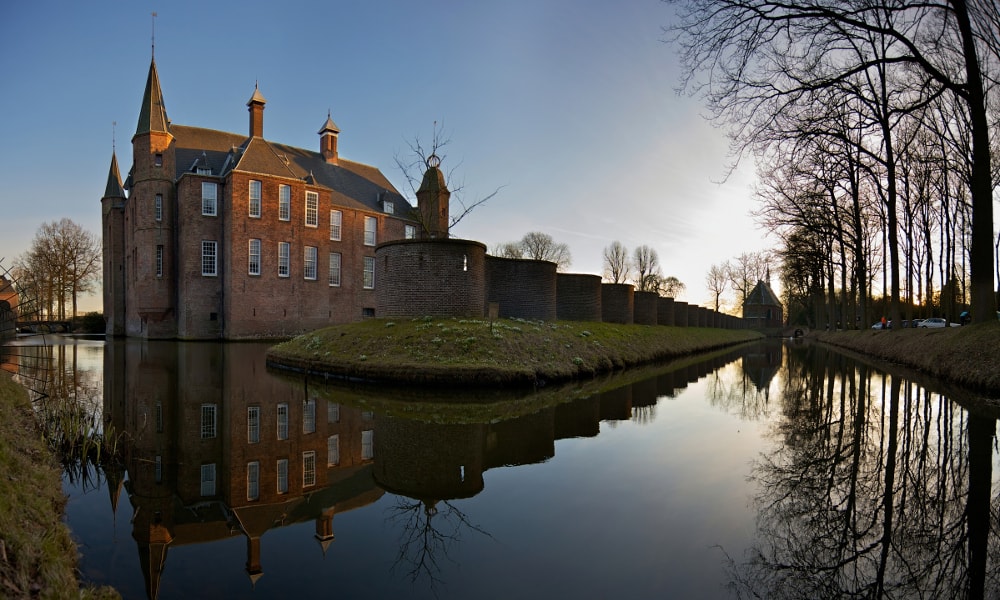 Zuylen Castle is located along the river Vecht at the southern end of the Vechtstreek just north of the city of Utrecht.
The castle was originally built in the 13th century by lord van Suilen en Anholt as a simple donjon. In 1510, the castle was rebuilt and in 1752 it was modified for the last time. The castle holds a tapestry by the Delft carpet weaver Maximiliaan van der Gught.... view details

De Haar Castle is one of the biggest and most luxurious castles in The Netherlands. The current buildings, all built upon the original castle, date from 1892 and are the work of Dutch architect P.J.H. Cuypers, in a Neo-Gothic restoration project funded by the Rothschild family.
Few castles in The Netherlands can equal De Haar for its ideal image of a medieval fortress with towers and ramparts, moats, gates and drawbridges. The interior of the castle is decorated with richly ornamented woodcarving, which reminds one of the interior of a Roman Catholic church.
Surrounding the castle there is a park that contains many waterworks and a formal garden which reminds one of the French gardens of Versailles. De Haar Castle ranks among the top twenty most visited ...... view details