The best castles and forts from Ireland

The most beautiful castles in Austria

Everywhere in Austria it seems there are palaces, castles, forts, and ruins. Many of the castles were impressive structures built on the highest hills or mountains, while others were nestled in a forest of green trees. Visit with us the most majestic Austrian castles, imposing fortresses and grand palaces !

Burgruine Gallenstein is a ruined castle in Styria, Austria. The ruined Gallenstein Castle hosts many concerts and exhibitions as well as the annual Festival St. Gallen. The noble family von Gallenstein resided at the castle at one point.... view details

Burg Kreuzenstein was constructed on the remains of an early medieval castle that had fallen into disrepair and was then demolished during the Thirty Years' War. Intended to be a family vault for the Wilczek family, it was rebuilt in the 19th century by Count Nepomuk Wilczek with money from the family's large Silesian coal mines.
Kreuzenstein is interesting in that it was constructed out of sections of medieval structures purchased by the family from all over Europe to form an authentic-looking castle. Thus, the castle can be considered both a 'neo-' and 'original' medieval structure.
The castle is sometimes used as a location for films. It is sometimes confused with the medieval castle Burg Liechtenstein, where the movie The Three Musketeers was filmed in 1993.... view details

Hochosterwitz Castle is considered to be one of Austria's most impressive medieval castles. The rock castle is one of the state's landmarks and a major tourist attraction.
The castle stands on a 172-metre high Dolomite rock near Sankt Georgen am Langsee and east of the town of Sankt Veit an der Glan, about 20 km away from the city of Klagenfurt. It can be seen from a distance of up to 30 kilometres on a clear day.
Some parts of the castle are open to the public every year from Easter to the end of October. Tourists are allowed to walk the 620-metre long pathway through the 14 gates up to the castle; each gate has a diagram of the defense mechanism used to seal that particular gate. The castle rooms ...... view details

Ambras Castle is a Renaissance castle and palace located in the hills above the city of Innsbruck. Considered one of the most popular tourist attractions of the Tyrol, Ambras Castle was built in the 16th century on the spot of an earlier 10th-century castle, which became the seat of power for the Counts of Andechs.
The cultural and historical importance of the castle is closely connected with Archduke Ferdinand II (1529-1595) and served as his residence from 1563 to 1595. Ferdinand was one of history's most prominent collectors of art. The princely sovereign of Tyrol, son of Emperor Ferdinand I, ordered that the mediaeval fortress at Ambras be turned into a Renaissance castle as a gift for his wife Philippine Welser. The cultured humanist from the House of Habsburg accommodated his ...... view details

Hohensalzburg Castle sits atop the 'Festungsberg', a small hill in the Austrian city of Salzburg. Erected at the behest of the Prince-Archbishops of Salzburg with a length of 250 m and a width of 150 m, it is one of the largest medieval castles in Europe.
The fortress consists of various wings and courtyard. The Prince-Bishop's apartments are located in the so-called high floor. These include the Golden Hall, richly decorated which indicates that the fortress served the archbishops not only as a refuge in times of crisis, but frequently also as a residence, as well as the Golden Chamber, the most magnificently furnished room of the princely chambers.
Hohensalzburg Castle was refurbished from the late 19th century onwards and became a major tourist ...... view details

Hohenwerfen Castle stands high above the Austrian town of Werfen in the Salzach valley, approximately 40 kilometres south of Salzburg. The castle is surrounded by the Berchtesgaden Alps and the adjacent Tennengebirge mountain range. The fortification is a "sister" of Hohensalzburg Castle both dated from the 11th century.
Formerly the castle belonged to the Habsburg family of Austria. Currently, their relatives, The House of Sforza, Count Andreis, reside within it.
Nowadays the bastion functions as a museum. Among the numerous attractions offered by the fortress are guided tours showing its extensive weapons collection, the historical Salzburg Falconry with the falconry museum as well as a fortress tavern. The historic Falconry Centre is a special attraction, offering daily flight demonstrations using various birds of prey, including eagles, falcons, ...... view details

Aggstein Castle is a ruined castle on the right bank of the Danube in Wachau, Lower Austria. The castle ruins are situated at about 300 metres above the right bank of the Danube on an outcrop running from east to west. It is some 150 metres long and has a rock structure at both ends.
In the early 12th century, the time of the Kuenrings, the castle was besieged and destroyed at least twice. After the Ottomans burned it down in the 15th century, the castle was redesigned as a fort, equipped with embrasures for the artillery.
From 2003 to 2004 the Aggstein Castle Restoration project was set up. As part of a series of postage stamps featuring the landscapes of Austria, on 30 November 1973 the Austrian Postal Service issued a 5-Schilling definitive ...... view details 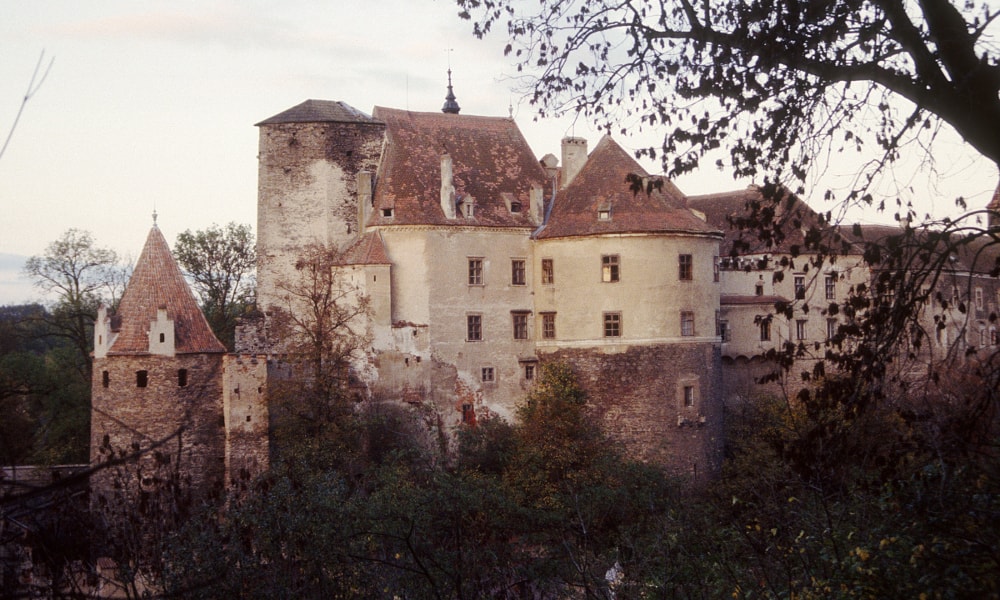 Burg Raabs an der Thaya is a long-drawn-out hilltop castle that stands on a rocky spur high above the town Raabs on the Thaya. Today, the castle is still inhabited.... view details

Schloss Ort is an Austrian castle situated in the Traunsee lake, in Gmunden, 19 kilometres from Vocklabruck, the gate to the resort area of Salzkammergut.
The castle was founded around 1080 by Hartnidus of Ort, and improvements continued to be made into the thirteenth century. In 1483, Schloss Ort passed to Frederick III, Holy Roman Emperor.
At present the castle is being used for a study center of the Federal Ministry for Land and Forestry.... view details

Moosham Castle was probably built on the foundations of a Roman castrum fortress. It was later seized by the Prince-Archbishops of Salzburg and from the 14th century onwards served as the residence of an episcopal burgrave.
At the end of the 18th century, the castle fell into ruins. In 1886 the Austrian explorer and patron of the arts Count Johann Nepomuk Wilczek purchased the ruin and had it restored. Up to today the complex is a private property, though its rooms featuring Wilczek's extensive art collection are accessible to the public.... view details